Plenty of Shade to Go Around 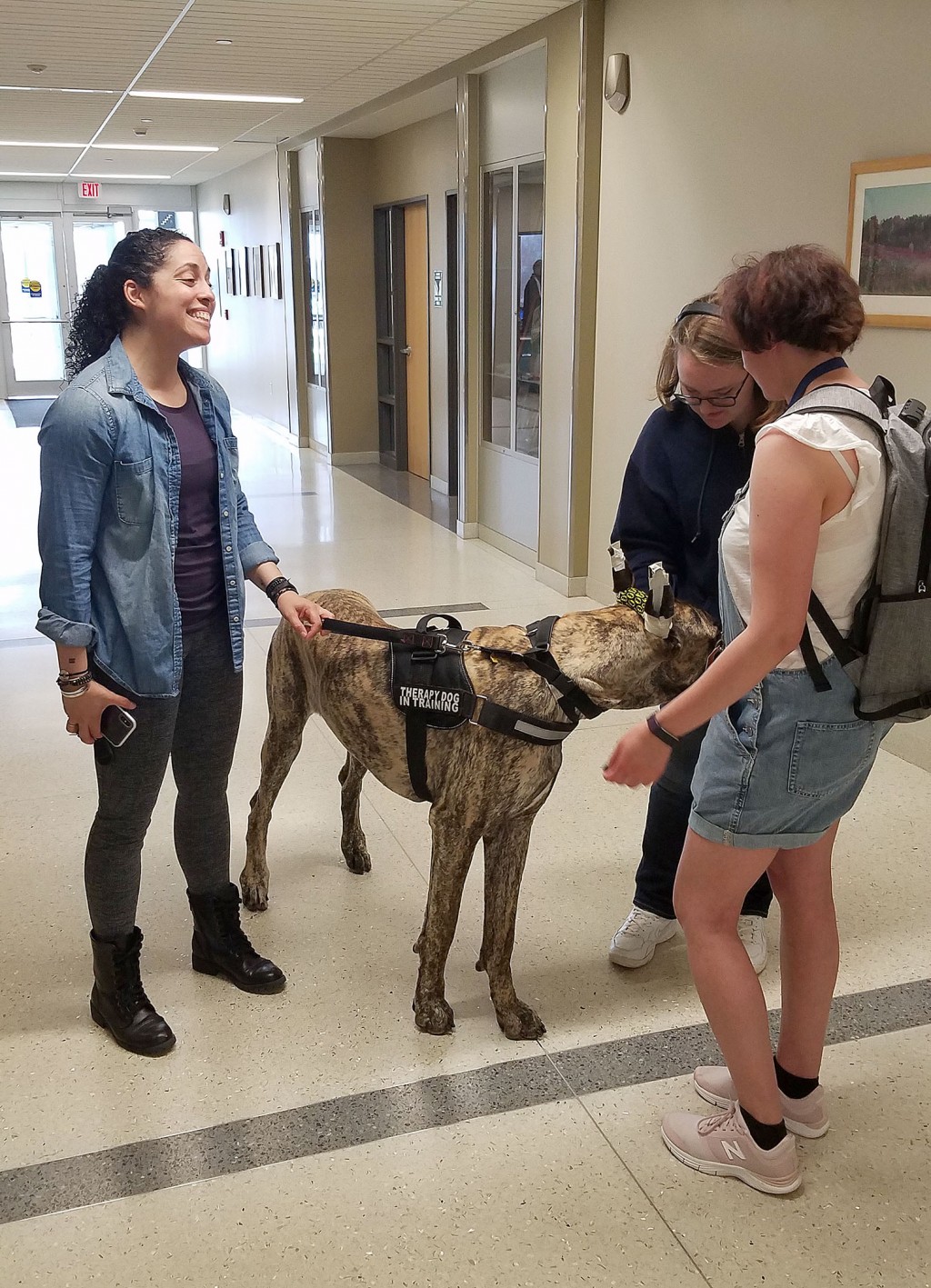 At 162 pounds, the Kirkwood Community College therapy dog can still get much bigger. Shade, a Great Dane who will turn one year old on May 9, isn’t done growing and certainly is anything but an average puppy.

Sociology professor and Shade’s owner Alissa King has been preparing him since she first got him last summer. As his owner, handler and trainer, King has spent many hours grooming him to take his official therapy dog certification once he has reached his first birthday. “The dogs have to be at least one year old to test, so depending on when PetPartners announces the testing date, Shade will either be able to go in May or wait until June,” King said.

“Shade will be tested on a variety of skills to earn his official therapy dog certification, including obedience, how is he with a crowd, things such as if someone was to hug him tightly or hold onto him like a child may, how is he around another dog… they also look at grooming, his overall health and how we act as a team,” King continued.

“It has been such an awesome experience and is amazing how he has been received, not only on campus but also in the community. We have been to a variety of places including regional centers, an elementary school in Marion and Methwick… he has quite the social calendar,” King stated.

In fact, Shade is so popular that if all goes according to plan, King said she and her family will welcome a second Great Dane puppy in a few months. “We are working with a different breeder this time and a litter is due May 15, so we are waiting to see what happens there. If it works out, we will get another male Great Dane and start the whole process over with him. I will start bringing the new puppy on campus in July the fall, he will rotate with Shade so we can meet the needs of campus and the community, plus give them both the rest they need,” King announced.

Many studies have shown how interaction with animals is beneficial and different species have been used for therapy in the workplace, hospitals, long-term care facilities and schools.

“We go to the nursing department before their exams and we are going to be in the library on May 2 during activity hour. We have some availability including the week before and week of finals so if anyone wants a visit from us, they are welcome to get a hold of me to set something up. We will also be on campus during the first six weeks of the summer session and at all of the orientations so we are going to be around if students, faculty or staff should need us,” King said.

“He has succeeded in every situation I have put him in and it is so great to see his personality develop and how much he enjoys being around people. We do very well together and I am very proud of him,” King beamed.

When he is not at a scheduled event, Shade is walking the hallways making new friends, accompanying King to class or resting in her office. To schedule a date and time to visit with Shade, e-mail alissa.king@kirkwood.edu