Flowers were left at the Anamosa State Penitentiary in a makeshift memorial, as seen on March 28, 2021. PHOTO BY JESSICA MCWILLIAMS. 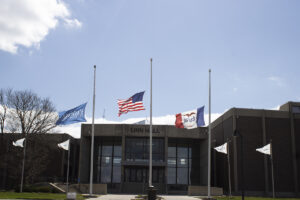 The flags on campus were lowered, per Gov. Reynolds request, to honor the victims, as seen on March 28, 2021. PHOTO BY JESSICA MCWILLIAMS.

The state of Iowa was shocked to hear that two staff members, Lorena Schulte, a nurse, and corrections officer, Robert McFarland, were killed in an escape attempt on March 23 at the Iowa State Penitentiary in Anamosa. A third staff member, Lori Mathis, also a nurse, was held against her will while another inmate, McKinley Roby, was injured in the escape attempt when he tried to give medical aid to the injured staff members. According to KCRG, the penitentiary was both over capacity and understaffed.

The penitentiary in Anamosa is one of the largest employers in the community and is less than 30 miles from Kirkwood’s main campus. Nearly everyone in Anamosa knows someone who either works there currently or has worked there in the past.

The news left many in the community shocked. Current Kirkwood student, Carter Kovarvna, said that “it was shocking to hear.”

In a press conference, Governor Kim Reynolds ordered flags to be lower to half-staff in honor of the victims. Reynolds said, “Today, our state grieves the loss of two public servants who were attacked while on duty at the Anamosa State Penitentiary.” Gov. Kim Reynolds also stated, “My prayers and deepest condolences are with their families, friends, and colleagues as they begin to cope with this senseless tragedy. We will exhaust every available resource to deliver justice to those who committed this act and bring a sense of closure and peace to the victims’ families.”

In response to the attack at the Anamosa State Penitentiary, wardens were reassigned throughout the state to “provide reliable leadership at the respective facilities where leadership changes have occurred, and to allow for a thorough and impartial review of the tragedy that occurred at Anamosa.” According to the Iowa Department of Corrections, the penitentiary has been understaffed which led to unsafe conditions.

The last escape attempt was in the early 1980’s. This most recent escape attempt is something many people will push to the back of their minds as it is hard to forget the risk of living and working in a community near a prison. Both of the inmates involved in the attack have been charged with murder and face life without parole if convicted. A trial start date has been set for June 22, 2021.  A second attack on a staff member happened just one month after the deadly attack in March. The news of an additional attack has spurred law makers to urge Governor Reynolds to pass laws to improve safety in prisons across the state.

Like some citizens of Anamosa and the surrounding communities, John Hansen said “I thought that the worst offenders were sent to Fort Maddison. I guess bad things can happen anywhere.”

Anamosa has been known for its annual giant Pumpkinfest and for being the birth place of famed artist, Grant Wood. Now, it will be forever linked to a cruel act that took two of their own and shook the community to its core.