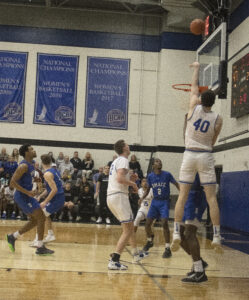 No. 40 Blake Brinkmeyer takes a jump shot on Friday, March 4, against DMACC. Kirkwood came up short losing to DMACC 84-66 in the Region XI Championship game. PHOTO BY JESSICA MCWILLIAMS 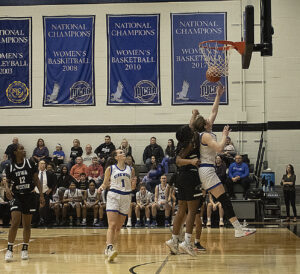 No. 50 Ashley Tull goes up for a layup during Sunday, March 6, against Iowa Western for the Region XI Championship game. Kirkwood won 65-44. Tull was named the ICCAC Player of the Year. PHOTO BY JESSICA MCWILLIAMS

The Kirkwood women’s basketball team was back in action this weekend playing in the NJCAA Region XI Tournament. The Lady Eagles won the two games leading up to the eventual championship game on Sunday against Iowa Western.

The Eagles found themselves down by one point at the end of the first quarter, but that lead for Iowa Western was gone by halftime. The Eagles took the lead at 27-25 and then went on an 8 to 1 run in the final two minutes and thirty seconds of the second quarter to close the first half with a nine-point lead of 35-26.

Despite being outscored 16-13 in the third quarter, Kirkwood still had a six-point lead going into the fourth. The fourth quarter is when the Eagles really flexed their defensive ability, only allowing two points the entire quarter.

After the game No. 32 Corey Whitlock said “We knew our defense was probably going to win us the game not our offense.” The Eagles won the game with a final score of 65-44. No. 5 Tasia Jordan provided a great spark off the bench for the Eagles scoring 12 points, tying the high for the team with No. 10 Jada Devine. Jordan also provided a great inside presence with five blocks.

The Lady Eagles close the season out with a 32-1 record and a regional tournament win. Coach Muhl was awarded the ICCAC Coach of the Year after the game, and No. 50 Ashely Tull was named ICCAC Player of the Year. They now turn their attention to the NJCAA DII National Tournament. Kirkwood is currently ranked No. 1 in NJCAA DII rankings. Corey Whitlock commented on the opportunity to go to nationals  saying “I think we’re all ready to fight for it and win the whole thing.”

The Kirkwood men’s team was also in action facing off against Des Moines Area Community College in the NJCAA regional championship. The Eagles fell in a hole early in the first half down 19-4 and never could recover, eventually losing with a final score of 84-66.

No. 40 Blake Brinkmeyer led all scorers with 27 points in the game while no other Eagles managed to get into double figures. The Eagles men close the season with a 23-8 record and will look ahead to next season.