Excitement builds as ‘Shrek’ is brought to life 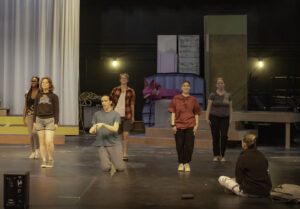 Cast members practice choreography on stage during rehearsal on Monday, Oct. 3, 2022, for the upcoming performance of “Shrek the Musical.” PHOTO BY JESSICA MCWILLIAMS 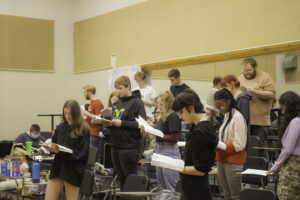 Students at Kirkwood Community College are gearing up to perform “Shrek the Musical,” a show that brings the much-beloved 2001 film onto the stage. Rehearsals began during the first weeks of the semester, though some students prepared for several weeks before auditions took place.

There is a broad range of experience among the student actors and actresses. For Gege Wael, an international transfer student from Indonesia, being involved in this musical has been a dream of hers for some time. Gege will appear as one of the Three Blind Mice this November. She said she is very excited to be on the stage, as this is her first time being in a musical.

The mastermind behind the Dragon in the performance is Justeen Schoner, who has a B.A. in musical theater which she attained after attending Kirkwood. She has more than 12 years of experience in theater. When asked why she enjoys taking part in musicals she said, “I love building a character from the bottom up. Someone else may have inhabited the character before but I get to put my own personal spin on it.”

Shrek himself is played by Gray Degeest, a student who has played lead roles in several well-known musicals, such as “Beauty and the Beast,” “The Pirates of Penzance” and “Elf.” When asked why he keeps returning to the stage he stated, “It’s fun to tell stories.”

Indeed, many admire theater because of its function as a mouthpiece for expression. Students come to life when they get the chance to embody a persona different from their own.

Dylan Whitlock, who plays the role of Gingy, has been involved in theater in a variety of ways throughout middle school and high school. Something she enjoys about being a part of “Shrek” is the community built around it. “There’s always a lot going on and people to meet. It’s also a great escape from the stresses of life,” she said.

One of her favorite scenes to watch is the Rat Tappers appearing during the song “Morning Person.” She said, “I smile like a child on Christmas every time I watch them do it. It’s magnificent.”

Of course, there is also a lesson to be gained from watching “Shrek.” Many of the cast agreed that the audience members should leave the show with a sense that “it’s okay to be different.”

“Shrek” teaches a lesson on what true beauty looks like. Not unlike an onion, each person has layers, and it is what lies within one’s core that truly matters.

“Shrek The Musical” will hit the stage on Nov. 3 at 7:30 p.m. in Ballantyne Auditorium.