Shakespeare and Jazz: Kirkwood’s vocalists bring a mix of bebop and musical poetry to the stage 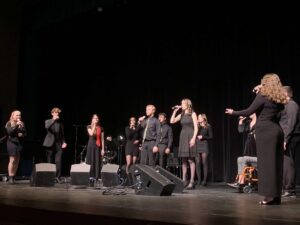 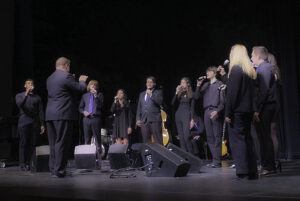 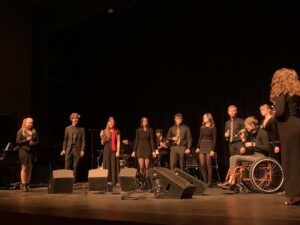 Ballantyne Auditorium was filled on Saturday night with the poetic lyrics of the Elizabethan  Era, bound together by smooth harmonies.

An assortment of jazz tunes also made their way to the stage for Kirkwood’s winter choir concert, which showcased Jazz Express, the Concert Choir and Jazz Transit.

The first half of the concert, performed by the Concert Choir, centered around a common theme – pieces were all lyrically composed of the works of William Shakespeare.

Drawn from his numerous writings, the concert ebbed and flowed with Shakespeare’s evocative imagery and emotion.

Fred Kiser, the director of vocal music at Kirkwood, said he knew that the idea of marrying classic literature with modern jazz would produce interesting results. “Coming up with a theme that represents two significantly different elements … [can be] challenging at times,” he noted.

Kiser added he admired the diverse range of musical influences the idea could produce.

“What I liked about the music we performed is that we had pieces from a variety of styles, ranging from heavily classically influenced to the 50’s swing era,” Kiser said, “which shows that musical texts can be described in many different ways.”

Vocal music students have been preparing diligently for the concert all semester. Each of Kirkwood’s music ensembles offers one credit hour per semester in which  any student can participate, music majors or otherwise.

During the latter half of the concert, both Jazz Express and Jazz Transit took the stage. Though their tunes did not follow the Shakespearean pattern, they showcased jazz standards such as “Au Privave” and “Corcovado,” Motown hits, “How Sweet It Is To Be Loved By You,” as well as “Signed, Sealed, Delivered.”

Kirkwood’s music students will present just one more concert this semester. On Dec. 10, the Kirkwood Concert Band will take the stage in Ballantyne Auditorium at 7:30 p.m.  As per unusual, admission is free for all students and faculty members.