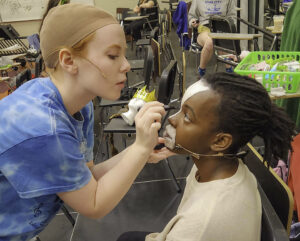 Isaiah Morel, who portrays Donkey, has his makeup done by Callie Dalton, a member of the ensemble cast. PHOTO BY JESSICA MCWILLIAMS 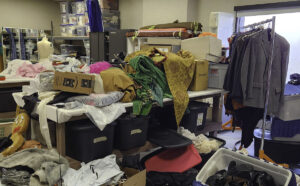 The costume shop ahead of Thursday’s opening night was organized chaos as the costume designer Emily Ganfield put finishing touches on costumes and props. PHOTO BY JESSICA MCWILLIAMS 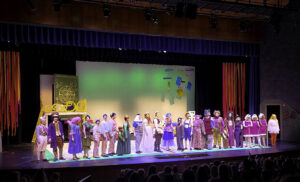 The cast of “Shrek the Musical” prepares to take the finale bow after the final show on Nov. 6, 2022, in Ballantyne Auditorium. PHOTO BY JESSICA MCWILLIAMS

“Shrek the Musical” closed to a sold-out crowd on Sunday, Nov 6. The musical is based off a book by William Steig that was later adapted into a film by DreamWorks Animation in 2001.

“Shrek” was chosen by the Kirkwood Drama department to be the fall musical with the hope that it would bring smiles to the audience.

The musical follows Shrek as he tries to rid his swamp of the fairytale creatures that have been kicked out of their homes in Dulock by the evil Lord Farquaad, and forced to take up residence in his home, the local swamp. Shrek and Donkey are sent by Lord  Farquaad to rescue Princess Fiona from a dragon that had trapped her in a tower.

An unfortunate misunderstanding happens when Donkey discovers that Fiona is also an ogre and that she fears Shrek could never love her as she is and that forces her into the arms of Lord Farquaad.  Thankfully Donkey is a far better friend to Shrek than Shrek is to Donkey and he forces Shrek and Fiona to talk out their real feelings so they may get their true loves first kiss.

The set of the play was made up of children’s story books which were stacked to create the tower Fiona lived in. Young actors from the community were  cast to show the passage of time for Shrek and Fiona.

The production used puppets and puppeteers to create Gingy and the dragon. Shrek was portrayed by Gray DeGeest, Devin Beckert was cast as Lord Farquaad, the roll of Donkey was played by Isaiah Morel and Anna Masengrab portrayed Fiona.