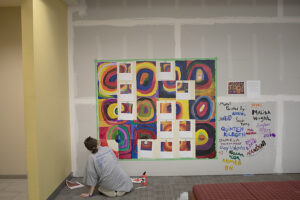 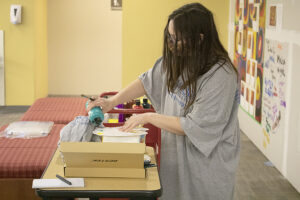 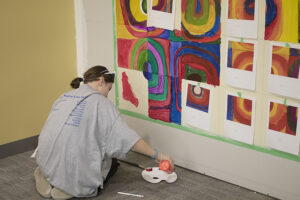 Ella Shaaw paints a section of the mural in the Kirkwood Library on a wall that is part of the construction and renovation of the space. Eventually, the wall will be painted over when construction is done. PHOTO BY DEBRA MCROBERTS

The Kirkwood Community College Library has opened up their wall space to some artistic creativity during the renovations that are taking place on part of the library and what was known formerly as Iowa Hall and is now being renovated into a new Student Center here at Kirkwood.

Department Assistant Sarah Young has been in charge of the implementation of the project after Kirkwood Librarian Sarah Uthoff  came up with the idea to fill the dreary wall space that was altered during some summer renovations at the library.

“Our librarians got tired of looking at an ugly construction wall and thought ‘we should have a mural.’ We didn’t want to do something overwhelming because it’s only going to be up until January,” said Young. “We came up with the idea of doing a collaborative project where each person could do a square of the mural.”

Currently participants can come by the library and paint by appointment by visiting their calendly link available at the library or they can drop in every Tuesday and Wednesday from 11:15 a.m. to 12:10 p.m. During their selected time they can paint their square of the design that was curated by Young and the Arts and Humanities department.

Currently there are two murals being painted in the library and they are designed to resemble different artworks by famous artists. Currently they are curating their depiction of Keith Haring’s 1989 work dubbed Retrospect and Wassiy Kandinky’s 1913 work named Squares with Concentric Circles.

The artwork was picked to make sure any novice artist can participate in the relaxing activity offered by the library.

“We wanted it to be a fun thing for anyone to do, not necessarily requiring artistic talent,” Young said.

The project started over the summer with any staff that wanted to participate invited in to paint parts of the mural, now they are inviting students to come and do the same.

“We started in the summer with some staff doing it when they had time and now we have more students getting involved,” Young said. “People seem to think it is a nice break from studying and work, the things that we are dealing with now.”

The mural helps bring in students and make a collaborative environment according to Young. It is there to brighten the space and take away from the dreary construction and winter to come.

“Part of it is that there is so much construction going on in the library and in Iowa Hall that it can get draining. So it is just nice to have something to brighten the space and your spirit and try to make the best out of the situation,” Young said.

Liam is attending Kirkwood to major in Journalism and Mass Communications to transfer to the University of Iowa.