Students ‘danced all night to the best song ever’ 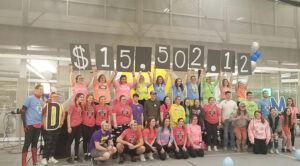 At the end of the evening students hold up signs to show $15,502.12 was raised at the event. The total was kept a surprise from the students until the big reveal. PHOTO BY JESSICA MCWILLIAMS 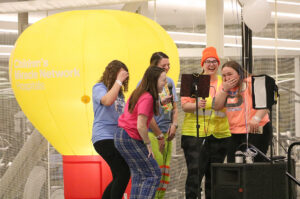 Kirkwood Dance Marathon raises more than $15,000 for U of I children’s hospital

Dance Marathon returned to an in-person event at Kirkwood for the first time since the pandemic began in 2020. Kirkwood is the only community college in Iowa to host its own Dance Marathon and one of the few nationwide.

The theme song for the event was One Direction’s “Best Song Ever” which was played throughout the night and a total of $15,502.12 was raised for the University of Iowa Stead Family Children’s Hospital.

Throughout the night, families whose children have received treatment at the children’s hospital shared their stories of how cancer or other medical issues have affected their lives. The parents of Austin ‘Flash’ Schroeder, Craig and Stacy, shared both the loss of their child and thanks for the students who turned out to raise money and show their support for childhood cancer patients.

In another sharing of a personal story, Nile Kron’s parents, Brittany and Rick, stated their son went through three code blues, which according to WebMD.com is “a hospital emergency code used to describe the critical status of a patient,” cleft lip and plate surgery and received cochlear implants. Nile also took a moment to share his appreciation.

Kaylin Seeman, Liberal Arts, said she chose to volunteer this year because she was a miracle child for a past Cedar Rapids Dance Marathon. Seeman said, “Out of all the dance marathons I have been to, this year was my favorite. I loved being so shocked to see that we hit our goal. It was the best feeling and something I will never forget.”

Seeman added, “A lot of people are scared away by the fact it is called Dance Marathon because they think they have to dance the whole time, when honestly you don’t have to dance at all if you don’t want to. I would describe it to others as an opportunity to give back and help children and families that are spending so much time at the University of Iowa Stead Family Children’s Hospital.”

Throughout the night students changed their clothing to match themes like Hawaiian and pajamas as moral boosters. They were also able to take part in activities like a bag tournament, dodge ball and video game competition.

Seeman said anyone who would like to get involved in next year’s event can check out Kirkwood.edu/dancemarathon.