The win followed Sophomore nigh, which was held on Oct. 30. The evening honored not only the players and their commitment to the program but also their parents.

“Our sophomores have all been fantastic within their respective roles and or positions for us this year,” said Head Volleyball Coach Jill Williams about the past season’s performance.

#4 Maddie Huff is the daughter of Jason and Hope Huff. Huff formerly played middle hitter for Don Bosco Catholic High School. Huff was not able to participate this season due to a back injury however, she regularly started for the Eagles last season.

Last year, she earned academic, all-region first team recognition as well as making the Kirkwood Community College Dean’s List. Huff plans to transfer to a four-year school to finish out a degree in psychology.

#6 Maranda Wheelock is the daughter of Jeremy and Terry Wheelock. Wheelock formerly played defensive specialist for Ogden High School where she earned all-conference recognition. She currently leads the Eagles in total digs and digs per set and is ranked 18 with total digs for National Junior College Athletic Association Top 50 Stat Leaders.

She was recognized with academic all-region first team in 2017 and also made the Kirkwood Dean’s List. Wheelock plans to transfer to the University of Iowa to earn a biomedical engineering degree.

#8 Madi Wagaman is the daughter of Russ and Dee Wagaman. Wagaman formerly played setter for Springville High School where she earned all-conference and all-state recognition.

Wagaman is currently ranked within the NJCAA Top 50 for total assists and assists per set.

Last year, Wagaman earned academic all-region second team recognition as well as making the Kirkwood Dean’s List. She plans to transfer to a four-year school to earn a business degree.

#9 Abbie Ericson is the daughter of Tracy and Pam Ericson. Ericson formerly played right side hitter for West Sioux High School. She is currently ranked at 23 for total blocks within the NJCAA Top 50 Stat Leaders. Last year, she achieved academic all-region first team in addition to making the Kirkwood Dean’s List.

Ericson has already earned both an Associate of Science degree and an Associate of Arts degree. She plans to transfer next semester to continue her athletic career at Briar Cliff University, where she will complete her physical therapy degree.

#16 Taylor Carey is the daughter of Kathie and Morey Owenson. Carey formerly played middle blocker for Waukee High School, where she earned all-state and all-conference honors.

She currently leads the Eagles with 174 total blocks, which places her third in the NJCAA Top 50 Stat Leaders for total blocks and blocks per set. Carey plans to transfer to a four-year school to complete a degree in business marketing.

“Our sophomores have all been fantastic within their respective roles and/or positions for us this year…I believe after the post season awards have been announced there will be even more to talk about.” 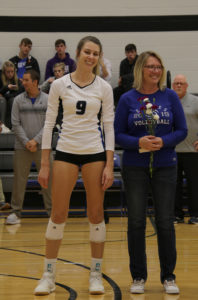 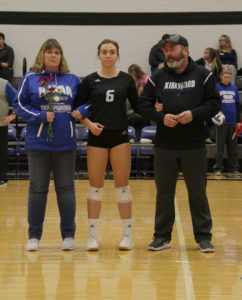 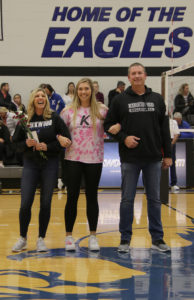 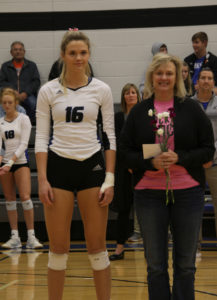 Photo by Jeff Sigmund
# 16 Taylor Carey sophomore escorted by Kathie Owenson for sophomore night before the game against Hawkeye Community College on Oct. 30. 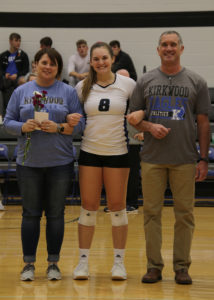