Described by ensemble member Sam Dolinsek as a revenge story, the musical was set in Victorian era London and centered around the barber Sweeney Todd returning home to find his daughter and settle the score with those responsible for the loss of his family and livelihood. Many murders follow as Todd descends into madness and meat pies. Some cast members say the story is a cautionary tale.

“We are all one bad day away from becoming Sweeney Todd,” said Shane Snapp, who played the character Fogg and supported the ensemble.

The rumors about how good the production was echoed in the comments of other patrons waiting for the show to begin.

“I’ve heard good things. My classmates who are a part of the staff have said nothing but good things,” said Damien Jambor, second year Liberal Arts student.

Patrick Reading, production manager for the Kirkwood Theater Department was in the crowd greeting patrons as they entered and shared his feelings as well.

“I’m very excited, I started with Kirkwood this year in August. Sweeney Todd has been a creative challenge but it’s been great working with the cast and crew. I’ve felt very welcome and look forward to many future shows,” Reading said.

According to Snapp, opening night was the best opening he had seen during his six show career in performing arts, which was carried forward by the energy and excitement of the crowd, along with the enthusiasm of the cast.

“We were all very enthusiastic about the whole thing, which really pushed everyone,” said Dolinsek.

Leading up to the show, there was a lot of preparation, teamwork and practice required for the over twenty cast and crew to bring everything together by opening night.

“Every Friday we would all be called for music rehearsal. The last four weeks we were definitely in the mode. That’s when we started implementing acting and building the set. The set hadn’t been built until the Wednesday before the show. The choir team came in to help us finish in time,” Snapp said. 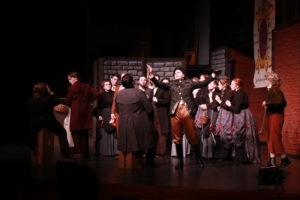 Photo by Nikko Francois
Pirelli (Carl Richey) and Sweeney (Gabe Crozler) compete to see who is the better barber. 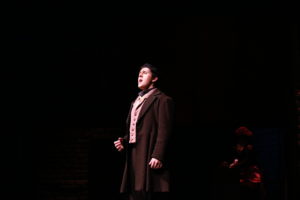 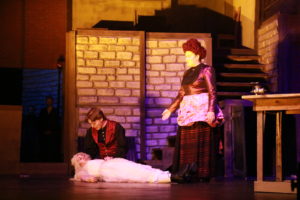 Photo by Nikko Francois
Sweeney Todd (Gabriel Crozier) mourns the death of his wife (Harli Steichen) while Mrs. Lovett looks on in the final act on Nov. 7. 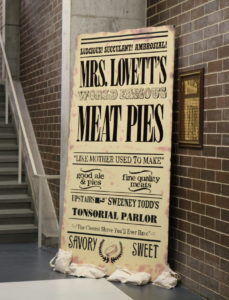 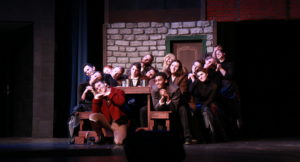 Leading the show was Gabe Crozier, who played the title character Sweeney Todd, in addition helping behind the scenes as well.

“Gabe Crozier, who I was very proud to see in the role of playing Sweeney, was definitely a leader spending a lot of outside time helping the set and making sure people were safe,” Snapp said.

Supporting the main characters throughout the show was the ensemble cast, who colored in the scenes by filling London’s streets with characters going about their daily lives, along with scenes in the pie shop, musical numbers and the escape from a mad house. In certain scenes, the ensemble would cue the audience to important events.

“We call that the shadows, which means the scene was really important and we let the audience know to really pay attention and listen in that moment,” Snapp added.

The show closed on Sunday Nov. 10 and was one of Kirkwood’s most popular shows in recent memory.

“We had close to 900 attendees for the run of the show. We averaged about 260 to 270 per night. I was told that it was some of the biggest houses we have had here at Kirkwood. Attendance was really good,” Reading explained.

Achieving such success was the result of many long hours and dedication by the many technicians, actors, musicians and staff.

“The show went really, really well. The thing that I am most proud of is that everyone gelled. When everybody is on the same page and buys into what we are trying to do everything runs really smooth. This show and what the audience saw were a bunch of people working really, really hard toward a common goal. When all that gels together you have an incredible show like we had with Sweeney Todd. I am very proud of what the crew accomplished. I truly respect all their hard work and I can’t wait to see what happens next,” Reading continued.

The end of the show also means more time for self-care and less time spent with friends that were made on set.

“We are all a little bit sad on the inside. These are all really cool people that we only get time to see when working on the production. There’s also definitely some sickness that comes when finishing the show, you’re just mentally telling your body to get through the show and then you crash at the end,” Snapp explained.

Students who attended the show and want to know if they can join in the next production are encouraged to apply, even if they don’t have a great deal of experience.

“If there is anybody who isn’t a performance arts major, it doesn’t matter, just do the show. Any area you could contribute to just audition for it,” Snapp explained.

To the audience who attended, the cast and crew had only two words, “Thank you.”