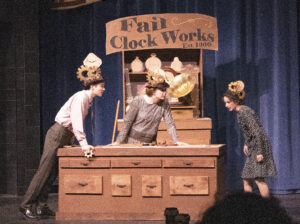 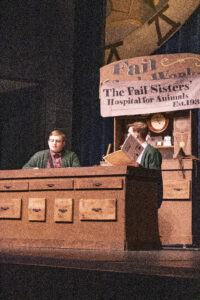 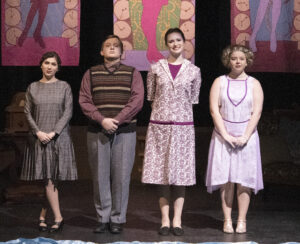 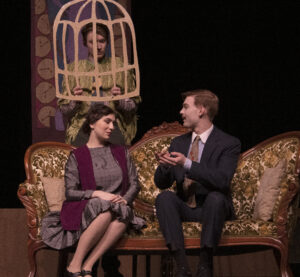 The story is set in the 1920s, and is centered around the lives of the three Fail sisters, who tragically all lose their lives during the duration of the play. Although lives were lost – through blunt object to the head, disappearance and consumption – this play was not so much about death as life and love.

The stage set was well crafted and beautiful in presentation, with details that immersed the audience into the age of radio and refinement. Open in concept, it allowed for freedom of movement, shifting easily from one scene to another. Costuming was well executed, with attention to detail in hair styling and wardrobe that helped to engage the audience in magic of the story.

Characters of animals and objects were played by actors. One such character was “Gramophone,” which was skillfully voiced by Justeen Schoner, whose vocal talents were up to the task of some very challenging pieces.

The addition of feathers, mock furs and skins to the animal characters added to their whimsical nature, and the lively portrayals brought levity to a sometimes heavy storyline.

Creative use of props had us swimming in the Chicago river with Jenny June, laughing with the disposal of John N’s beloved but old canine friend, chuckling to Mortimer Mortimer’s ukulele tribute to his love’s attention, and making an emotional connection with clocks in the Fail Clockworks Shop.

The production was enjoyable and left viewers contemplating the nuances of love, loss and learning to live again long after departing the theater.

Kirkwood’s next production, “PROOF” by David Auburn,  will be April 14 – 17 in Ballantyne Auditorium.

JoEllen is a non-traditional student, wife and mother – learning new skills in the Digital Arts program at Kirkwood. She is a writer, photographer, digital artist and lover of life.