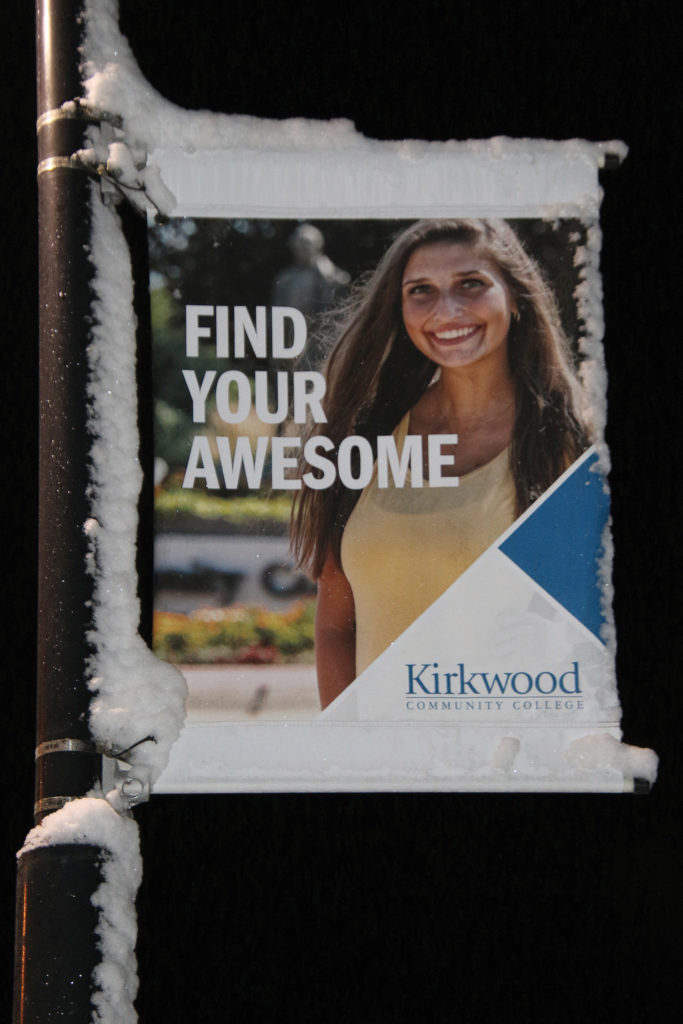 Photo by Jeff Sigmund
Snow makes its first appearance this semester with up to 3 inches falling on campus on Oct. 29.

Last week’s abrupt arrival of snowy winter weather left Halloween feeling more like a prelude to winter. While freezing temperatures and precipitation may have been a surprise to students, Kirkwood Facilities staff were already prepared.

“Last week’s weather we had somewhat of an idea on Monday that snow was coming. We had been working the last two weeks to get all our equipment ready. We run about 16 different pieces of equipment on campus that do the sidewalks and roads; the whole works,” said Troy McQuillen, vice president of Facilities and Security at Kirkwood Community College.

The Facilities Department has over 100 employees who plow and maintain over 60 acres of parking lots and 14 miles of sidewalks and roads.

“When it comes down to winter weather, snowfall, ice accumulation or anything along those lines it’s all hands on deck,” McQuillen said.

Three teams or “waves” of Facilities employees are on hand to respond to severe weather events on campus.

“The first wave, which is all of the full-time grounds personnel, will have an idea of what to expect in the morning. The second wave employees are the maintenance team that comes in and gets into the equipment when the snow stops. The third wave is the hand crew that shovels and does the back-breaking work. Everyone is involved in different ways, they just come on at a different time,” said McQuillen

The night before the snow began to fall, the first wave team was prepped and ready to go for Tuesday morning.

“When the grounds department left that night, which is a total of eight people, they were reporting at  5 a.m. the next morning. They are the ‘first wave’ and generally they are here while it is still snowing, keeping the roads, hotel, Rec Center and 24-hour or late-night facilities on campus open,” McQuillen explained.

Before students and staff had arrived in the morning, the first wave team was on campus, punched in, geared up and in their trucks ready to plow and load snow.

“They keep the roads open, keep our equipment open. They are the first wave of people who are keeping things safe on campus,” McQuillen said.

Operating behind the scenes, the grounds department is driven by a desire to keep Kirkwood safe and open against even the toughest weather conditions.

“Our grounds department really has a competitive nature…If it is just pounding down snow, we are staying just far enough ahead of it. The grounds department, the first wave, is really passionate about having as much done ahead of time prior to that. Lots of thank you’s come from all around including the Department of Transportation, the Rec Center, KCCK, and our own team,” McQuillen continued.

Last week’s snowfall and the beginning of daylight savings marks the end of warmer months and sunshine. For the facilities team, it was just the beginning.

“We all just work together. We know that this is the beginning of the facilities ‘Super Bowl’ in a lot of ways. Everyone from the first shift custodian…up to the directors all work together,” McQuillen said.

“Slow down and pay attention. Wear the proper clothing and footwear. We want zero slips, trips and falls. That’s our goal every year that everyone goes home safe. Often times we see accidents or cars in ditches because students are traveling way too fast on roadways,” McQuillen stated.

Kirkwood Alert is “the fastest, most accurate way” to find out about closures and delays, according to McQuillen.

If students are interested in joining facilities pay starts at $10.43 an hour, work schedules are  flexible See Kirkwood’s HR website for more details.

Of the over 100 facilities staff who work to keep students and faculty safe in inclement weather, the Communiqué would like to recognize the “First Wave” grounds personnel: