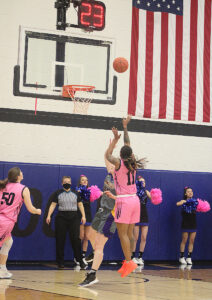 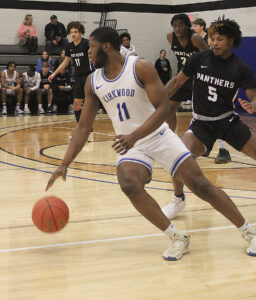 No. 11 Tolu Telli makes a move around a defender during the game against the Ellsworth Panthers on Feb. 10, 2022, in Johnson Hall. Kirkwood won 76-51. PHOTO BY JESSICA MCWILLIAMS

Not only did Coach Kim Muhl coach his team to a 115-37 win over the Panthers, it was his 400th career win with Kirkwood. Coach Muhl has been with Kirkwood for 33 years and has coached the team to seven national championships.

The Eagles got off to an energetic start and that energy never faded. No. 2 Naya Haymon leapt into the stands in an effort to keep the ball in play very early on in the first quarter.

The Panthers attempted to close the gap early so the Eagles wouldn’t run away with lead but they were never able to get within 20 points of the lead.

Unfortunately for the Panthers, they just couldn’t keep with up with the Eagles.

No. 11 Tati Hodges-Johnson  scored her career best of 23 points, including 3 three-pointers.

No. 3 Dom Rodriguez made 3 three-pointers as well, while  no. 14 Kortney Drake scored 24 for the team. The Eagles are ranked no. 1 in NJCAA DII.

The men’s game saw the Eagles win over the Panthers with a final score of 76-51.

No. 12 Dre Anderson put up 12 points while No. 10 Dante Eldridge scored 11 points, had five assists, three steals and two rebounds.