E-sports is a ‘league’ of its own

Two teams, one goal of creating a ‘fun’ environment

Kirkwood Community College Esports club has competed against the likes of Clemson University and Cornell University since their founding in March 2019.

The club recently signed with the National Junior College Athletic Association, which places them on the same plane as Kirkwood’s traditional sports teams.

Rob Netolicky has held the position of vice president since the club’s founding last spring. Netolicky is also the captain of Kirkwood’s Overwatch team. The club manages two teams; one for Overwatch, which consists of 10 people and another for League of Legends, which is made up of six people.

“It started when…our president, Cash, was coming and buying his books and he had a TESPA t-shirt on and I asked him about TESPA. I had previously competed with another school in TESPA so I was talking to him about that and he voiced interest in that and I said ‘You know what, let’s go for it.’ So we found an advisor, we found a couple more interested members. We had about six when we started and we were able to find our official club,” said Netolicky.

Photo by Alexis Haggstrom
The front of a jersey belonging to a member of the Overwatch team features logos from the bookstore and adjoining EagleTech office as well as sponsor TESPA’s. 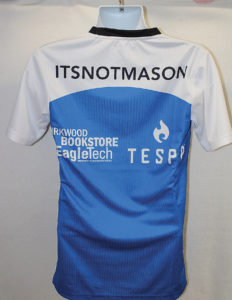 Photo by Alexis Haggstrom
The back of a jersey belonging to a member of the Overwatch team features logos from the bookstore and adjoining EagleTech office as well as sponsor TESPA’s.

Texas e-Sports Association, or TESPA, is an organization that manages collegiate-level tournaments however the League of Legends team uses another organization called Good Game, or GG League.

“We are currently in the process of setting up a Super Smash Bros. Ultimate Tournament. About half of our members are interested in Super Smash Bros…so it’ll be very interesting to see how that pans out,” said Netolicky.

About 108 members currently make up the club however 20 are directly involved with gaming. After the establishment of Super Smash Bros. the club expects to have close to 60.

“I’ve done a lot of research on esports collegiately. There are a lot of two-year schools that stack up quite well against four-year schools. Some of the best esports programs at the varsity level, not club level, are from two-year and four-year private institutions,” said Netolicky.

There are over 1,000 teams that are registered with TESPA and Kirkwood Esports currently sits around 450.

“For each game we play against a school, we play two or three maps; it’s best two of three…You get awarded a point for either winning or losing. Right now, we’ve won five out of our fourteen matches, so we’re right around there,” said Netolicky.

All of the players compete and practice from home. Each member has their own set-up and communicate via software called Discord.

“My short-term goal right now is to establish our Super Smash Bros. group…As for long-term goals, I have a lot… My goal for the club is to continue having an environment where people can come, have fun, and grow within the esports community. I would like to see every game that people have an interest in having a captain and have a following,” said Netolicky.