Eagles blow Lakers out of the water 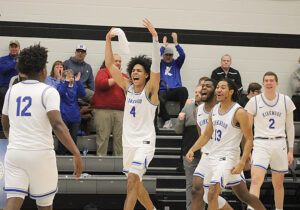 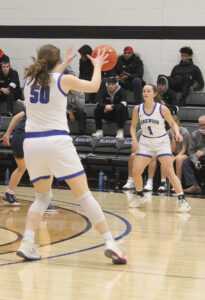 #1 Karsyn Stratton passes the ball to #50 Ashley Tull as Kirkwood hosts Iowa Lakes on Wednesday, Feb 2. Kirkwood won 92-51. Kirkwood has a 24-1 re- cord and is ranked no. 2 in the ICCAC. PHOTO BY JESSICA MCWILLIAMS

Kirkwood Community College hosted a doubleheader against the Iowa Lakes Lakers in Johnson Hall on Wednesday, Feb. 2. The Lady Eagles got off to an explosive start and by the end of the first quarter the Eagles were up 25 to 8.

It became clear that the Lakers were floundering; at halftime they were down by 31 points, with the score 51-20 favoring Kirkwood.

The Lakers continued to trail by 22 through the end of the third quarter. In the fourth quarter the Eagle’s blew the Lakers out of the water after dominating the entire game by throwing another 23 points on the score board.

#50 Ashley Tull was the game’s highest scorer with 19 points of her own along with 7 rebounds and two assists. #14 Kortney Drake also put up 10 points, 4 rebounds and 2 assists.

The men trailed the Lakers during the first half of their game. Not until the second half did the Eagles finally pull ahead thanks to #2 Caleb Delzell, who scored five 3-pointers all in the second half and a total of 19 points by the end of the game.

#4 Arthur Cox got his first double-double with the Eagles by shooting 11 points and 10 rebounds. #40 Blake Brinkmeyer made a big slam dunk late in the game that sent the crowd into a frenzy as he helped strengthen Kirkwood’s lead over the Lakers.

Kirkwood finished the game with a final score of 81-66 beating out the 14th ranked Iowa Lakes Lakers for the win. This brought the record for the 11th ranked Eagles to 17-6 and extended their winning streak to 7.