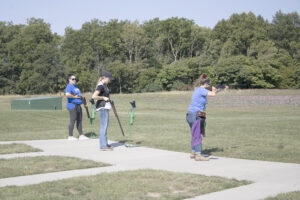 Zoey Baustian reloads her gun, as Jason Johnson takes aim at a clay pigeon at Otter Creek Shooting Club during a trap shoot meet on Sept. 18, 2021. PHOTO BY JESSICA MCWILLIAMS

Zoey Baustian, one of three women who participated in the trap shoot meet on Kirkwood’s team, had a score of 84 on Sept. 18, 2021. PHOTO BY JESSICA MCWILLIAMS

Kirkwood Community College has a wide range of activities and clubs for students to participate in, anything from stem club to baseball, Kirkwood offers it all.

One club in particular flies under the radar of most, the Kirkwood Shooting Sports Club. This club helps students with a love of shooting sports come together, practice and have fun while competing at collegiate meets. The shooting club mainly does trapshooting with clay pigeons or clay disc targets using shotguns as their weapon of choice.

Scheduled for six dual meets this fall, they have a busy season ahead of them. After their shooting meet on Sept. 18, the club is in position to have a well-rounded season.

Here are the results of the 100 target event:

For those who are interested the only requirement to join is to be a Kirkwood student with an interest in shooting sports. There are no fees to join the club, only to compete at the Scholastic Clay Target Program events which comes with a small range of fees. The students’ only responsibility is ammunition and weapons.

The club practices once a week during the fall with practices being suspended during the winter months. To join the club or get more information join them at Otter Creek Sportsman’s Club on Tuesdays at 5:30 p.m.

The shooting sports season runs seven weeks in the fall and a couple of competitions in the spring and students can still join.

Liam is attending Kirkwood to major in Journalism and Mass Communications to transfer to the University of Iowa.