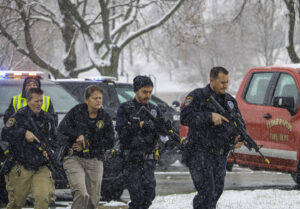 EMS and fire trucks arrive on scene to assist during the active shooter drill at Jones Hall on the main campus on Nov. 15, 2022. PHOTO BY SHAELY ODEAN 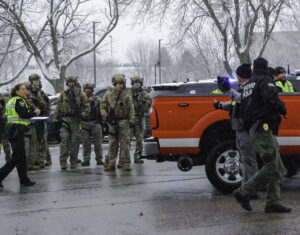 The scene was a well-planned, well-coordinated training exercise designed to teach first responders, students and faculty alike how to react if the unthinkable were to occur.

Involving many emergency response agencies including the Cedar Rapids Police and Fire Departments, the Linn and Johnson County Sheriff’s departments and several area EMS services, the magnitude of this drill cannot be understated. All told 110 first responders participated in the drill, and while it may have focused on the main campus, it was not limited solely to Kirkwood’s Cedar Rapids location. Every Kirkwood satellite campus enacted lockdown protocols and used the exercise as an opportunity to review their emergency response plans.

With so many organizations and locations involved, the active shooter drill took more than a year to plan.

“The CRPD reached out to me in October 2021 and asked about practicing for an active shooter event,” said Andrew MacPherson, associate vice president of Public Safety.

Seeing this as an opportunity for Kirkwood, the event expanded to include different emergency response tools the college utilizes in the event of an actual emergency.

“[It was] an opportunity to test our email and text notification systems. We could test the college’s ability to do a basic lockdown, our outdoor alert system and discuss the continuity of business plans with the President’s cabinet,” he said.

Kirkwood’s CRPD representative on campus, Officer Landon Einck, echoed this sentiment, calling the training exercise exciting. “We go through a lot of training, but when we go through real-life training it’s a positive,” explained Einck. “The type of training along this magnitude is great. It’s not often you’re able to bring in fire, ambulance, Johnson and Linn county sheriffs. It’s a pretty big deal.”

The drill was also mandated by federal law.

The Cleary Act requires colleges to publish an annual security report and engage in community response drills. In Kirkwood’s case, a large emphasis was placed on practicing as a community, and most involved in the drill highlighted the efforts made to fine-tune coordination between departments. “It’s always great for Kirkwood and the CRPD to develop their relationship,” stated Einck. “I love Kirkwood. I want to be as prepared as possible to assist.”

Keith Rippy, president of Area Ambulance, an EMS participant in Tuesday’s drill, agreed. “Our main goal is to ensure a coordinated response with the other emergency agencies,” he said.

One of the key elements of an active shooter response is emergency medical care, however, balancing the safety of medical professionals with the need for rapid medical treatment can be a difficult task. To confront this issue, the CRPD has been fine-tuning its response.

“[CRPD] had developed a new response to shooters, one where they could start bringing in fire and EMS to the wounded sooner,” said MacPherson. As a former law enforcement officer, he said he understands the importance of getting help to the casualties of an active shooter event as quickly as possible.

Rippy, working closely with the CRPD, added, “The level of danger is far higher in an active shooter situation. The responding unit stages in a safe place designated by the police department. We do not go into the scene until the PD indicates it is safe for us to do so.”

Area Ambulance made three units available to respond to the emergency call, and the medical response was enhanced by the use of five medical training mannequins from the Katz Family Healthcare Simulation Center. These lifelike medical training devices do everything from talk to bleed. “A unique opportunity, and a little bit more of a challenge,” said MacPherson.

Overall, MacPherson said he was pleased with Tuesday’s training exercise. “The drill went well. Our systems performed the way we thought they would,” he said. “Doing the drill on campus made it more ‘real life’, and the weather made it realistic, in a good way.”

MacPherson also noted that there is still more work to do to prepare for an active shooter event and emphasized student engagement and participation in Kirkwood’s emergency alert systems. He said, “We would like to see more engagement on Kirkwood alert. Right now we have 60% engagement; our goal is to reach 95% of campus in the event of an emergency.”

MacPherson strongly recommends that all student’s enroll in text and email alerts, so they can be kept informed in the event of an emergency. To sign up, go to www.kirkwood.edu/alert.