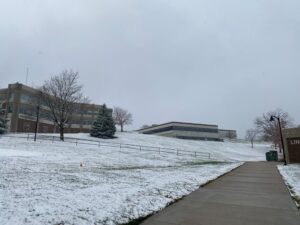 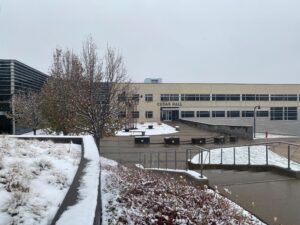 As the early winter snow starts to stick for the first time this season, along comes with it hazards of driving through an endless white scene of hidden slick spots along the path.

Of course, many of us have to overcome the annual learning curve of getting used to navigating icy roads as well as having to wake up early. Who doesn’t want to stay in their warm bed on a snowy morning? Perhaps most of us.

However, it’s actually better to get up sooner with so much to do. Warming up your car, brushing the snow off, clearing off the driveway and navigating through the icy road all take time. When we find ourselves getting late, we tend to be more reckless on the roads, not being wary towards other drivers and passersby and driving fast, which causes the driver to be more likely to lose control, especially on ice.

Remember to take it slow. As much as we want to arrive at our destination as soon as possible, ice and snow make it difficult. Many have seen the joke of driving so slow during the winter season, and while it may be overexaggerated, it’s safer for everyone to avoid going over the speed limit. Many have heard the term ‘black ice,’ which is where ice forms on the roads, often times clear and difficult to see when walking or driving. When someone hits black ice, there is a sudden loss of traction on the road, making it more difficult to stop, turn, move forward and continue straight.

Turn on your headlights. For many cars, especially older models, headlights are manual and have to be turned on by the driver. Headlights are not only great for seeing at night, but also for helping drivers see each other. It doesn’t have to be night though to use headlights. It’s important to turn on headlights during bad weather such as rain, fog and snow, so drivers are able to see other drivers better and be more wary; this is especially important when turning into an intersection.

This is the season when driving carefully is the most important. While it’s important to arrive at your destination on time, your safety and the safety of others are more valuable.